The Sisters rose with a great surprise from the hostel girls who decorated our doors with balloons, logo and picture of Taj Mahal. The community Morning Prayer was a prayer of thanksgiving, followed by the children’s Rosary which was offered especially for the success of the day and for all JM Sisters all over the world. In the afternoon at 2.30 p.m. we had the meeting of parents / guardians during which we shared in brief the history of the foundation and how the Charism of Claudine came to existence and spread through the world beginning from Agra India, which completes 175 years today and is now spread through 28 countries. After this the two questions were translated to the parents and their answers were taken down by Mr. Ashwini Sardar.Their response was truly encouraging to live up our charism more fervently.

At 5 pm we had the solemn Eucharist in the Parish Compound officiated by Fr. Ravi Tribhuvan, the Vicar General of the Catholic Diocese of Nashik and concelebrated by fifteen priests from our Diocese, both Diocesan and Religious. Many Religious Sisters of other congregations, our Parishioners, ex-students, parents / relatives of our Sisters Ashwini Sardar, Vidhya Patare and Romana Shindhe, families of our present Staff and students, some doctors and well-wishers from all different religions and caste came in response to our invitation and to express their own gratitude for all that they received from the Congregation.

In his homily Fr. Tribhuvan encouraged people to follow the example of saints and to go forth and do the same. The JM Sisters were truly honored in sharing the communion under both species. The Parish community appreciated the pastoral and social work, especially in the field of education to the less privileged for the past 27 years here in Rahuri Factory was highlighted. The deceased Religious: Srs. Loretta D’Souza, Romana Shindhe and Victorine Brahmane were remembered with gratitude. After the Sisters congratulated the Vicar General, prizes and Religious the Parish community took us by surprise by congratulating the present community with flowers, gift, a frame of St. Claudine and a printed felicitation frame.Besides, the Vice President of the Nagar Palika sent his greetings and his family too congratitated the community.

The congratulations were followed by a historic enactment by the students and compered by the Staff of Ashirwad Nursing School. The 4 important events: 31 st July 1818- Fr. Coindre’s exhortation to form the Religious Community; Night of 5 th October 1818- the uncertain beginning with one widow, one loom and one orphan (including the devil dance); the meeting of 14 th July 1841 the decision and selection of the first group of missionaries for India and finally the grand entry into the city of Agra by bullock cart concluded by singing ‘How good God is’ in English followed by five Indian languages.This was followed by a message depicting the life of a girl child highlighting Claudine accepted the petite Deschaux girl and brought out the best in her – the same is the mission of the Sisters here at Rahuri Factory. After the Vote of thanks proposed by Mr. Asha Ohol the program was concluded by a vibrant tribal dance by the Nandurbag and Dhanu students of Ashirwad Nursing School.

All the guests were invited for an agape meal in the Convent premises which was served in the lush green lawns, while the special guests were served in one of the class rooms. The whole festive atmosphere and the glorious history were appreciated by one and all. An attempt is also made to form an ex-students’ association in the course of this year as a memory of the bicentenary, so in this regard those who were asked to leave their contact numbers and email addresses.

It was truly a marvelous and a memorable day were all put in their effort and it was a great success. 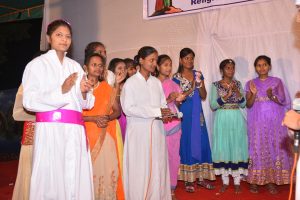 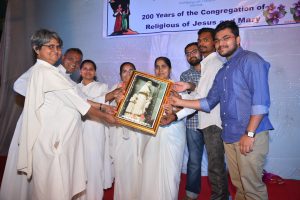 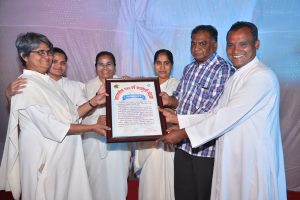 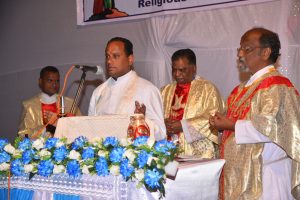