On November 13, 2017, His Eminence, Oswald Cardinal Thank you, with Bishop Agnelo Thank you, Bishop John Rodrigues and priests of the Archdiocese celebrated a special Eucharist at the Cathedral of the Holy Name to mark the beginning of the Bicentenary celebrations of the Foundation of the Congregation of Jesus & Mary. Celebrations have begun all over the world and will culminate on October 13, 2018.

All present were given to warm welcome by Mr. Arina RJM. At the outset, the lette r from the first Superior in Agra, India, to her General in France was read out. It spoke of the unique welcome that included a military band and a gun salute! The letter also dwelt on the initial difficulties and the work that needed to be done. It gave us a glimpse into the earliest history of the Congregation in India and helped us to understand how their presence has made such a difference over all these years.

His Eminence, being familiar with the Congregation’s work in Agra and in our own Archdiocese, expressed admiration and gratitude for all they do especially in the field of education. He made special mention of the Founder, Claudine Thevenet, who started out with just one helper, one orphan in one room during the French Revolution. Even though the revolutionaries had killed two of her brothers, she returned hate with love. The Cardinal’s homily encompassed the readings: the first from Ecclesiastes with that age-old message – there is a time for every purpose under heaven, and the Gospel which spoke of that most beloved story of the Good Samaritan. We need to do more than to remember and bless St. Claudine;We need to emulate her good work and her commitment, in the present time that is given to us.

The celebration of the Eucharist concluded with the blessing and veneration of the statue of St. Claudine Thevenet.

Hosted by the Sisters at Fort Convent, and attended by students, ex-students, and representatives from other Congregations and schools, the Eucharistic celebration was beautifully animated by the children’s choir, the teachers and the Sisters themselves.

Hearts swelled with joy as everyone ‘went forth to that beautiful, evocative anthem,’ Praised be forever Jesus & Mary, to hymn of triumph, glorious hymn … ‘ 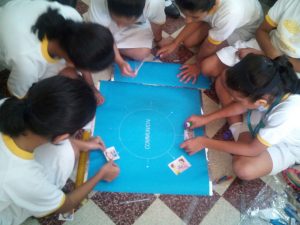 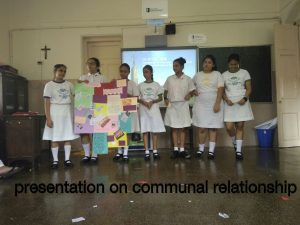 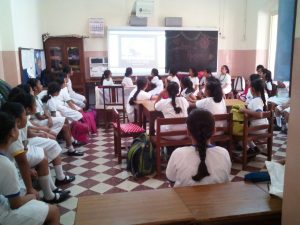 On the occasion of JM day  the following  trophies were awarded by Oswald Cardinal Gracias :-

For the Best in Mathematics and  for the Student who practices gospel values.

The other trophies were given by the school – 1) Secondary School girl who practices virtues of St.Claudine of goodness and forgiveness awarded to Tosiya Fernandes of Std. IX B.

2) Primary school girl who is kind and forgiving to Diya Tamar of Std. I.

There was an Inter-School Poster making competition on the virtues of Forgiveness and Kindness. Six schools participated and the prizes went to Alexandra Girls High School.  Oswald Cardinal Gracias also gave the scholarship of Rs. 30,000 along with the trophies.