A solemn Eucharistic Mass was held to celebrate ‘Jesus and Mary Day’ to mark commencement of the Bicentenary year of the foundation of the Congregation of Jesus and Mary at the St. Xavier’s Church, Camp, Pune on 13 th November 2017 at 08.30 Hrs.

A traditional dance marked the beginning of the Eucharistic celebration. A Power-Point Presentation depicting the Foundation and the works of the congregation of Jesus and Mary around the world was viewed during the service. The Bicentenary year is being celebrated from October 6, 2017 – October 6, 2018 since the Congregation led by St. Claudine Thevenet began its mission in the year 1818. ‘Journeying with Claudine’ was the theme of the Mass which was accompanied by the melodious choir consisting of the staff and students of St. Anne’s High School and Junior College.

His Lordship, Bishop Thomas Dabre congratulated the members of the congregation for their ‘Dedication and Commitment’ towards society and especially the girl child. Citing it as a Historic event, His Lordship commended the sisters for their values ​​of Discipline, High standards of education imparted through their institutions and Selfless service to the irrespective community of Caste, Creed and Community. I’ve emphasized the need to be more like St. Claudine, continuing the good works in society, spreading her message «How Good God Is.»The Congregational Anthem was sung after which the declaration of the Bicentenary was announced with the release of balloons by His Lordship Bishop Thomas Dabre, Sr. Diana Colaco and Sr. Sylvia Coelho in the presence of the cheering FJM members, parents and well wishers.

A small get together was held in the school premises after the function creating a bond of fellowship among the members present which culminated with the signature greeting – «Praised be forever Jesus and Mary – Amen». 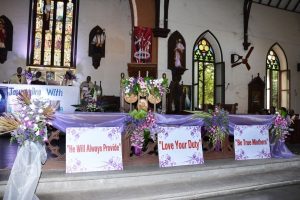 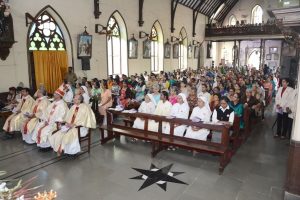 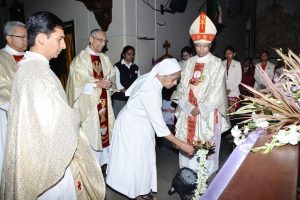